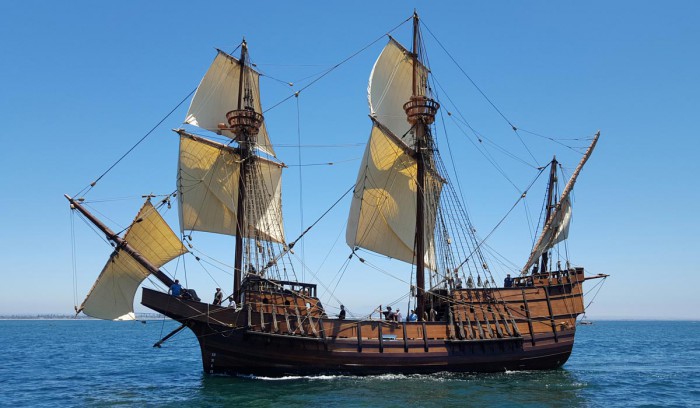 The San Salvador under the command of Juan Rodriguez Cabrillo, arrived at the port we now call San Diego on September 28, 1542. The ship then proceeded further north in search of new trade routes that would link Mexico to Asia and Europe. She was the first recorded European vessel to sail along Southern California, and survey its coastline. Her expeditionary’s established a generally friendly first contact with the indigenous peoples of the area. The San Salvador must be considered the founding ship of San Diego and of the State of California. She functions as an “origin symbol” ship for San Diego in much the same way as the Mayflower is the origin symbol ship of New England. Her story represents the beginning of a common heritage for the peoples of California, both past and present.

The Maritime Museum of San Diego’s construction of the San Salvador is based on painstaking research in the fields of Early Modern Spanish and Portuguese maritime history and maritime archeology. Experts have scoured volumes of historical narratives, examined all the available images of early-sixteenth-century sailing vessels, and surveyed the remains of contemporary shipwrecks. They believe that the new San Salvador will be a highly accurate representation of the vessel that arrived at San Diego in 1542. To execute this vision, the Maritime Museum has engaged a group of skilled professional boat builders, who are assisted by scores of regular volunteers.

The new San Salvador will function much more than just a static museum display. Homeported in San Diego, she will also sail along the coast of California, visiting its cities and towns as a floating education platform for California’s school children.

As of September 04, 2015, her first official public unveiling, she has been at the Maritime Museum docks as interior construction and rigging continues. San Salvador is open for dockside viewing during normal museum hours.