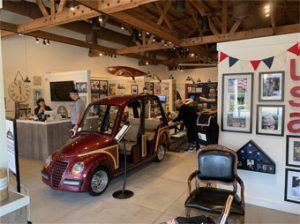 Balboa Island has long been one of the most popular destination for Orange County residents and visitors, alike. Now, since the grand opening of the New Balboa Island Museum and Historical Society on November 30, 2018, locals and tourists can experience Balboa as never before, with an entertaining and in-depth look at the rich and storied history of this beloved island.

Originally founded in 2000 in a much smaller space a few blocks away, The Balboa Island Museum and Historical Society – now located in a historic building at 210 Marine Avenue – has nearly tripled in size. The new facility allows for expanded exhibits, new collections and other amenities, including a children’s interactive zone and space for community gatherings and events.